So club colors became pink, purple and gray. Gray was added to balance everything out. The national affiliation was with USDAA (United States Dog Agility Association). We also held sanctioned agility trials affiliated with NADAC (North American Dog Agility Council) and ASCA (Australian Shepherd Club of America) when NADAC and ASCA were combined. Added later were trials sanctioned by CPE (Canine Performance Events). During summers, CAT provided agility classes through Clovis Adult School. The Club has annually donated money to Central California Society for the Prevention of Cruelty to Animals (CCSPCA). Communication with other club members is facilitated with a members only email. In addition, our club has a website at k9agility.org. Further, in keeping up with modern technology, our club has added a page to Facebook, giving us additional contact with the public.

Starting a new club with no equipment included a big financial investment by Tammy Domico and her father, Ed Fields. Tom Haskel donated the use of his ‘homemade’ trailer until a replacement could be purchased. Additionally, Tom Haskell and Burt Huie made some of the original equipment. It was a real grassroots group effort with a lot of ‘energetic’ dialogue along the way. Later, in-coming members were assessed an equipment fee of $50.00 plus membership dues of $40.00. Powder coating metal parts involved a lively discussion with multiple colors being used.

Founding members and their dogs were Tammy Domico with Snarf and Bailee, both Queensland Heelers, and Karlee, her father’s Rat Terrier; Karen Birdsong with Mandy, a Mixed Breed; Becky Harstad with Missy, a Dachshund; Ann and Burt Huie with Princess, an American Cocker Spaniel; Tom Haskell with Arnie, a Shih Tsu and Sadie, a Pug; Eric Rollins with Lefty, a Queensland Heeler; Francis Kahn with Cathy and Ruff, both Schipperkes; Lorie Lesher with Annie, a Queensland Heeler; Duane and Terri Carlile with Rocket, a Brittany Spaniel and Sunny, an American Cocker Spaniel; and Lyn Bowler with Hannah, a McNab.

CAT hosted two USDAA trials every year from 1993 until 2008 when our club numbers became so few that we no longer could support the work needed. We then researched hosting by AKC using rented equipment and a hired trial secretary. We held an officially sanctioned A match in the fall of 2013. In 2014, we held our first sanctioned AKC Agility Trial. With the official approval of AKC,our club became Canine Agility Club of Fresno. Beginning in 2015 we held two AKC trials in the spring and continued in 2016. Also scheduled are two AKC trials in the spring of 2017. During all this time from 1993, weekly practices have been held at parks in Fresno and Clovis. Our club also sponsors Fun Runs, which are open to any competitor, to help provide ring experience prior to local trials. Currently the club is holding practice at the Training Yard of the CSPCA in Fresno.

“To form an agility practice group that encompasses fun, exercise and agility training from beginner through competitive levels”. 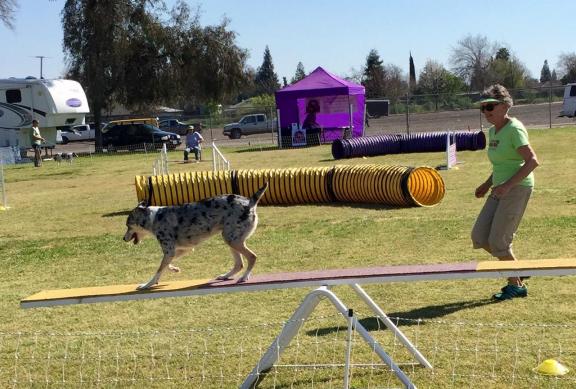